Some of the many accomplishments by Sensei Frank:

1992 Instructor of the Year Award

1994 Jiu-Jitsu Black Belt of the Year

1996 Competitor of the Year

A BIOGRAPHY OF SENSEI  FRANK  DUNCAN IN THE MARTIAL ARTS

Although Sensei Frank decided to take up formal martial arts training later than the norm, he has far exceeded in his capabilities.

He worked under the instruction of Sensei Terry Yanke for several years.

At this point he relocated to Barrie and decided to open his own dojo.

He had very mixed feelings with this as he knew he could no longer train at his home dojo in Kitchener/Waterloo with his Sensei.

He made sure to have the permission of his Sensei before opening his own Dojo. Following this etiquette was very important to him.

He was still commuting to his job in Toronto and running his Dojo in Barrie and all the while still training to reach his own goals.

During this period he was also training to be on the Canadian Team.

He was chosen to compete on the Canadian Team and he won Gold at the Provincial Championship in 1990.

From there he went on to the World Championship and he took a Bronze also in 1990.

All the while he continued to diligently establish his own dojo and which point he made a decision to become a full time instructor and has never regretted it.

In 1991 he was inducted into the Martial Arts Black Belt Hall of Fame.

This was a very busy time for Sensei Frank as he also received the Certificate of Achievement Award from the Ontario Government and was awarded CJA (Canadian Jiu Jitsu Association) Black Belt of the Year, as well as the Martial Arts Hall of fame Fighter of the Year Award.

After setting up tournaments for the CJA (Canadian Jiu Jitsu Association)  he became President of the organization.

In 1992 he was working long hours at his own dojo and training once again with the Canadian Team. He was off to the World Championships once again and this time he took Silver for the Team and Gold in the individuals.

In 1992 he was chosen as Instructor of The Year by the CJA (Canadian Jiu Jitsu Association).

He continued from there and achieved his second Dan in May1993.

In 1994 after putting in many hours of training once again he was off to the Can/Am Games where he won Gold for Canada. 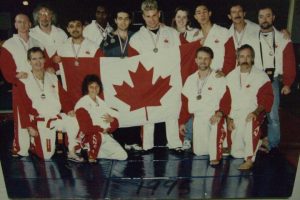 Also in 1994 he received the Special Achievement Award for all of his hard work and many achievements and was honored with the Jiu Jitsu Black Belt of the Year Award.

He still continued to train, set up tournaments, teach at his own Dojo and was President of the CJA (Canadian Jiu Jitsu Association) .

After much soul searching and watching the unrest in the CJA (Canadian Jiu Jitsu Association) he decided to step down from the presidency.

At this time his own Dojo had been doing very well and that’s where he wanted to keep his focus.

However, the urge to continue fighting was still very strong.

This was a very difficult task as an Instructor, as he had to make monumental decisions. He did not want to take anything away from his students, but had to make time for his training. I don’t know that anyone really knows the mental and physical training that has to take place. This consumed every fiber of his being as he was a fighter to be reckoned with.

In 1995 he was off yet again to World Championships.

Here was a man not in his late teens or early twenties, but mid thirty’s and once again he brought home the Gold Medal for Canada, and took a Bronze for an amazing last minute Demonstration that involved martial arts and disabilities. His own Instructor Sensei Terry Yanke was involved in this also.

Frank has also been working with the disabled for a very long time now. Every Saturday for 9 years he dedicated to teaching Jiu Jitsu to people with disabilities.

IN 1997 he was inducted again into the Black Belt Hall of Fame by the CJA(Canadian Jiu Jitsu Association) .

Once again the bug he had for fighting was still very much alive, so with more and more intense training he was ready to go again.

In 1998 he was off to Reno, Nevada to fight yet again in the World Championships where he had to defend his title and that he did.

He took the Gold Medal for Canada...

Since then he has continued to run his own Dojo and has been an instructor in many High Schools in the surrounding areas.

He continued to go to Toronto every Saturday to teach Jiu Jitsu to people with disabilities.

To add to his list of accomplishments, he is also a recognized as an International Referee by the World Council of Jiu Jitsu.

The urge to fight is always within him, and there are many times he wanted to do it again, but given that he’s has taken four gold medals in World Championships, he has chosen to do what he consider best for him and his many students and that is to retire from fighting and focus now on training fighters.

Given all of his accomplishments he has stayed well grounded, and offers nothing but the best to his students.

To see his students strive gives him as much pleasure as when he succeeded in his own accomplishments. 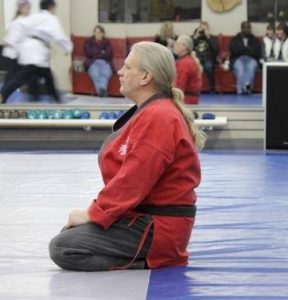